Our Beginning... Our Journey... Our Identity 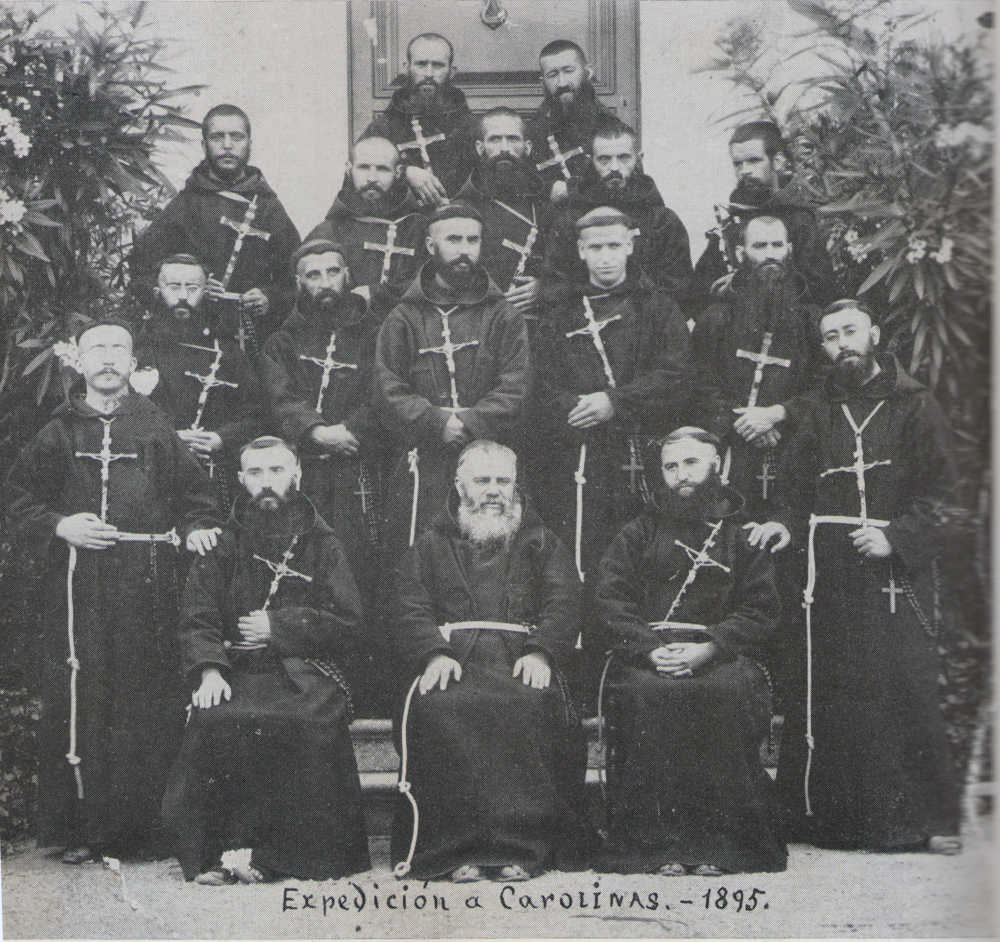 The establishment of Lourdes School of Mandaluyong was the result of the ambitious missionary zeal of the Capuchin friars in the Philippines who saw education of young people as a viable apostolate in the Philippines. Arriving in the Philippines in 1886, they first settled in Intramuros and later in Quezon City during which the Ortigas family was under their spiritual guidance. In grateful appreciation, the Ortigas family offered the Fathers assistance and facilities and were able to acquire a three-hectare lot along Shaw Boulevard, Mandaluyong. 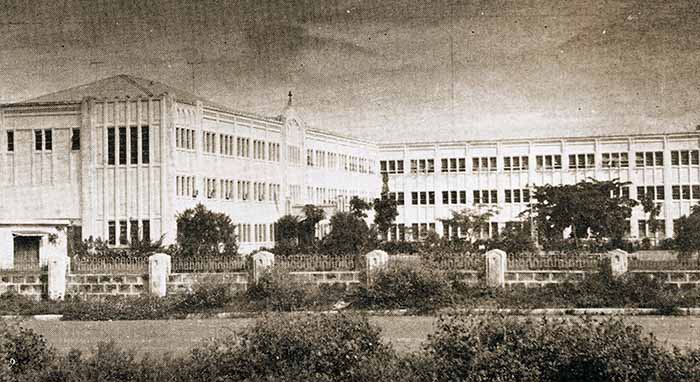 On October 4, 1958, the solemnity of St. Francis of Assisi, the chapel was opened to the faithful. The following May 1959, the cornerstone of the new building was laid by the late Very Reverend Father Adolfo de Echavarri, the superior of the Capuchins in the Philippines. His Eminence, the late Rufino J. Cardinal Santos blessed the L-Shaped structure- a combined chapel and school. 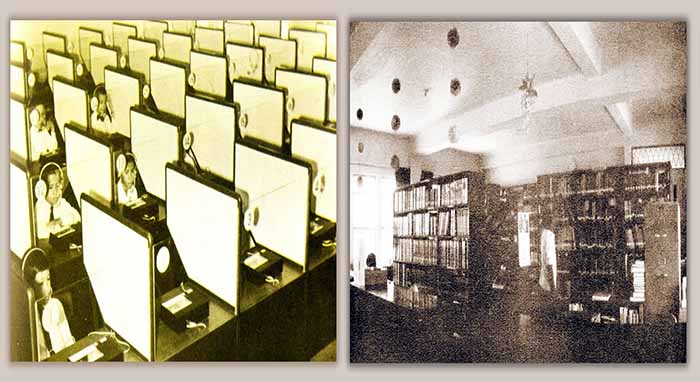 The late 60’s saw the rise of the St. Francis Church and the construction of the new high school building, a new canteen, an air-conditioned library, a swimming pool, and a 521-seat air-conditioned auditorium. It was during this period that Fr. Jose Luis Arrieta, OFM Cap. made Christian Life Education the centerpiece of its curriculum and all its activities. The school also responded to this declaration with an outreach program, servicing/visiting depressed areas nearby and in the provinces. To this very day, outreach and solidarity activities define the core of LSM’s activities to minister to the poor spearheaded by the Social Action Office of the Campus Ministry. 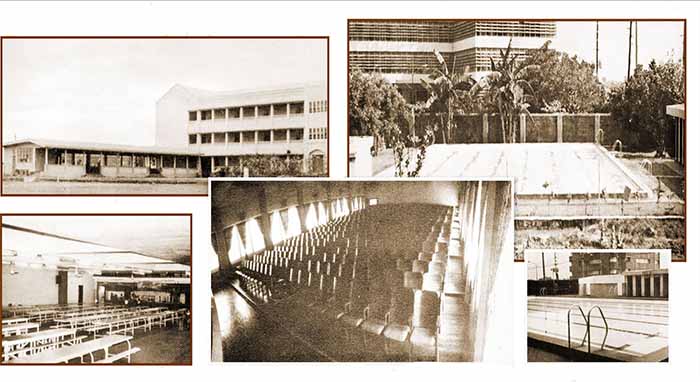 The 1980’s marked more improvements. With the support of the PTA, the school was able to construct the shower and dressing rooms near the playground, the extension of the canteen, and the covered walk leading to the swimming pool area.

LSM continuously responds to the challenges of the time with its cumulative facility improvements. In 2007, the tennis court was converted into another gymnasium named after Padre Pio of Pietrelcina. In 2009, t he institution carried out more innovations and enhancements: an 80-seat St. Clare Audio-Visual Center in the HS Department; renovations of the canteen, swimming pool area, playground, Lourdes Hall, St. Francis Theatre, Bro. Juniper Square Garden of Saints and pavement, gates and perimeter fence and Grade School and High School buildings. An extension of the high school building now named after St. Lawrence of Brindisi, houses four classrooms, the HS library at the third floor, and the relocated Science Laboratories at the 4thfloor.The TLE (Technology and Livelihood Education) workshops which were located at the Pax et Bonum Building are now all clustered at the HS Building. In each classroom is installed an LCD/ television set. Teachers can also access on-line instructional resources through Wi-Fi connection using Yopads. It was in 2010 when the libraries of both the GS and HS departments started its automation program.

LSM considers its LEVEL II PAASCU accreditation, granted by the FAAP (Federation of Accrediting Agencies of the Philippines) in 2010, a recognition of its commitment to quality Catholic education. From 2010 onwards, more physical facilities development initiatives in support of the school’s academic programs materialized as the school geared towards the challenges of curricular reforms. The renovation of the HS Faculty room and office lobby, the renovation of the HS Conference room, Subject Area Coordinators office and the different administrative offices in the high school department contributed to better work and learning environment for teachers and students. Classrooms dedicated to Music and Art classes, Drafting and Electronics classes in the St. Lawrence of Brindisi building provide for more conducive learning atmosphere.. 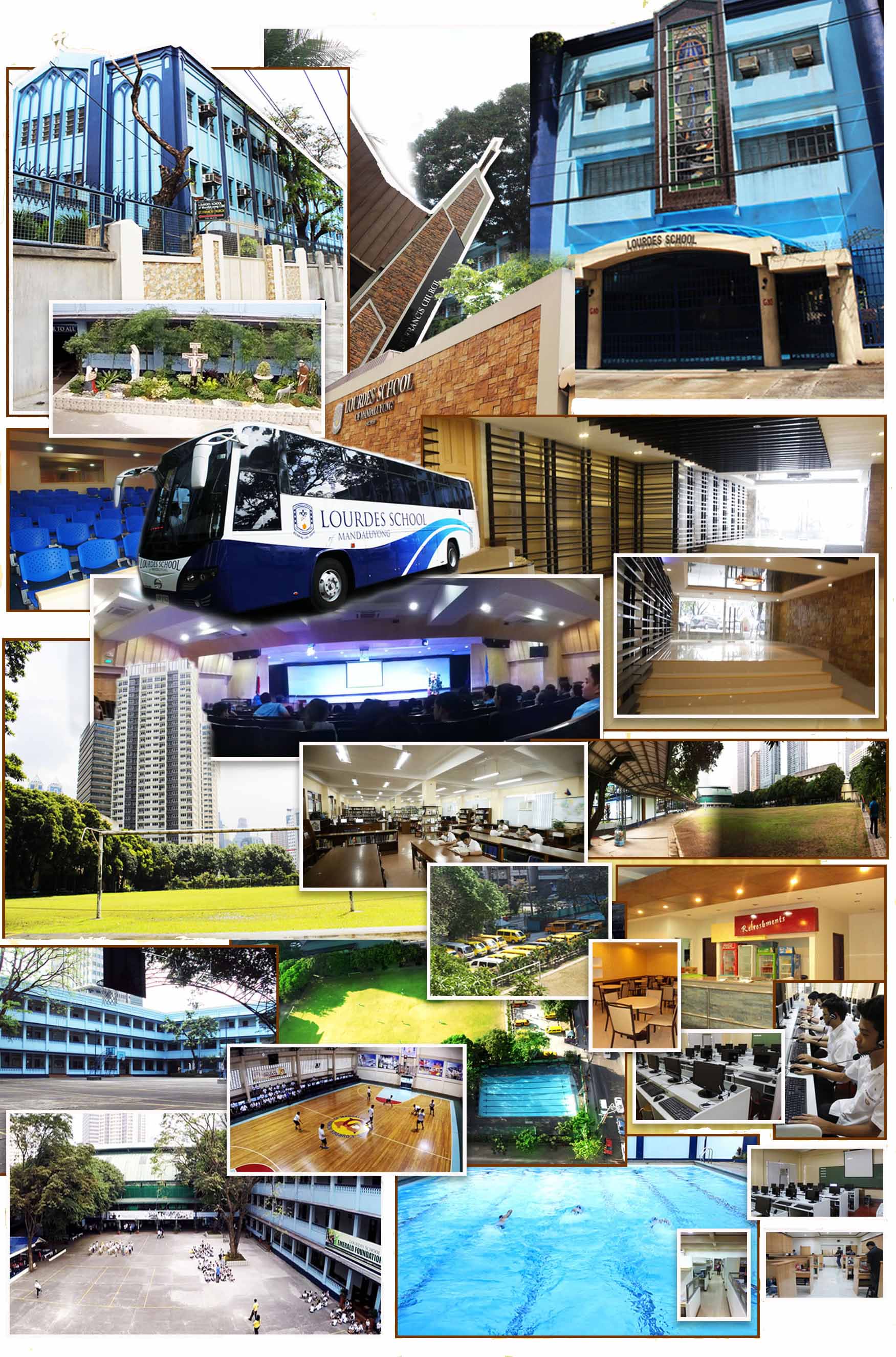 The implementation of the K to 12 Basic Education Program paved the way for more school improvement projects. Included in the priority projects in terms of academic facilities were the renovation of classrooms at the Pax Et Bonum building. More building activities were undertaken such as the construction of the SHS administrative office, academic classrooms, computer laboratory and Cybernook, satellite library, SHS Faculty Room, science laboratories and speech laboratory. Offices such as the PRHRD office, the Alumni Office, the PTA Office and the Student Activity Office which were transferred to the Grade School Bldg were refurbished. Also, in a small garden at the HS grounds facing the football field near the general assembly area now stands the statue of St. Lawrence of Brindisi, as if beholding a vision of young Lourdesian gentlemen transforming in the spirit of gospel brotherhood and minority. Alongside these efforts, Lourdes School of Mandaluyong is working towards a Franciscan pedagogy through a joint resolution of Lourdes School of Mandaluyong and Lourdes School Quezon City in 1998. Such pedagogy would shape and distinguish the characteristics and identity of Franciscan education. For 60 years and still counting, LSM has become an educational landmark. And all these years, LSM has remained true to its ideals of HOLINESS, EXCELLENCE and SERVICE. And this is our story: our humble beginnings, our continuing journey... our identity...lived by the countless graduates who are authentic witnesses to the school’s Vision, Mission and Philosophy: TO BECOME LIKE CHRIST!

Lourdes School of Mandaluyong is a CATHOLIC, FILIPINO, and Marian, Capuchin-Franciscan school established by the Order of Friars Minor Capuchin (OFM Cap.) Anchored on a philosophy of life and education -

The school envisions itself to be a center of excellence in basic education.

As a Catholic school,

Lourdes School is an educative community permeated by the Gospel values, and is committed to excellence through the integral formation of young male Christian learners who earnestly search for the truth, attain academic excellence, and critically assimilate culture in the light of faith thereby enabling them to live their project of life meaningfully and responsibly.

As a Filipino school,

the institution forms citizens who are habitually inclined to self-reflection and dialogue, permeated with a deep concern for justice and the common good, and imbued with a strong sense of patriotism and national pride.

it is committed to the development of human persons who are authentic witnesses to the Gospel values and selfless stewards, actualizing lives of Franciscan minority manifested in joy, peace, simplicity, brotherhood, solidarity with the poor and God's creation, and fidelity to the Church as exemplified and inspired by the Blessed Virgin Mary and St. Francis of Assisi.

THE OFFICIAL SEAL OF LOURDES SCHOOL OF MANDALUYONG 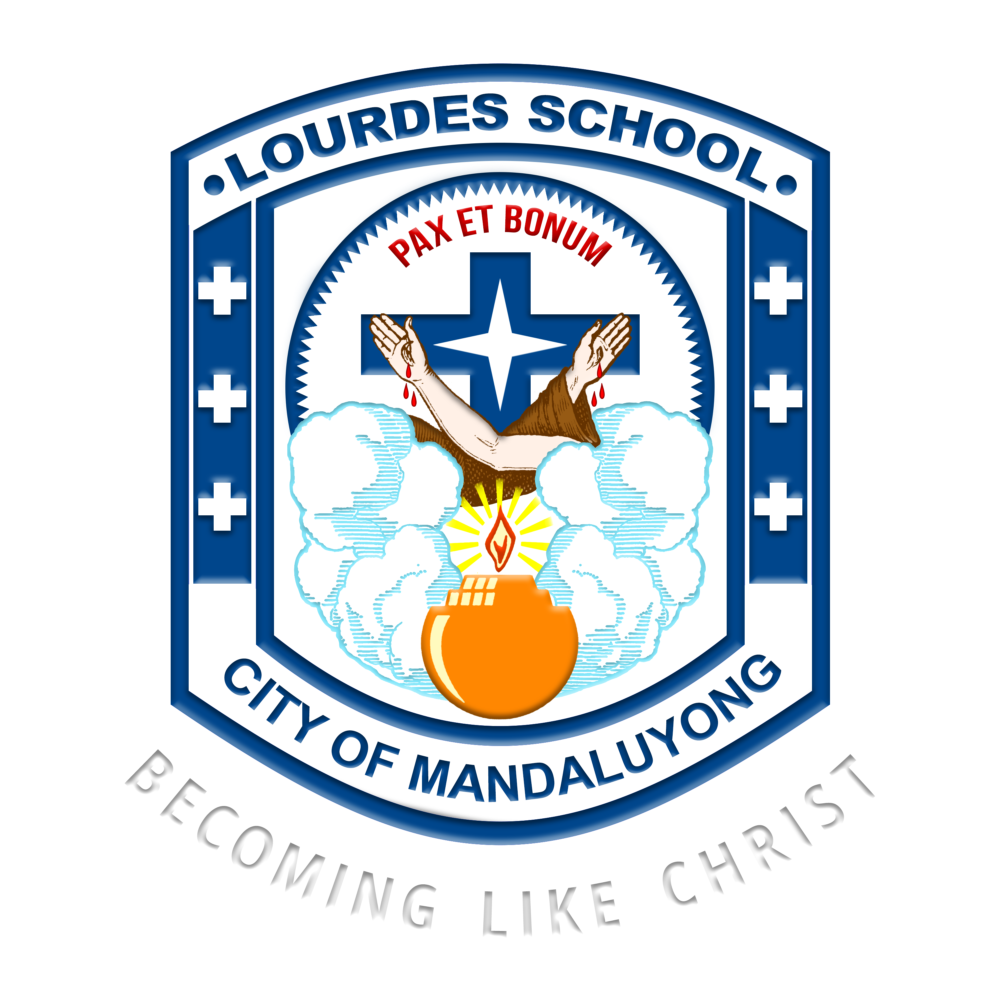 The dominant feature of the seal is the upper portion of the Cross of Christ and in its center is the star of Bethlehem. Just above the cross are the words PAX ET BONUM. Beneath these cross and stars are two arms crossing each other, their palms nailed to the ends of the horizontal bar.

Right below these arms is a torch shaped like a clay pot with bright light steadily burning. On both sides of this torch are clouds slowly rising towards the cross.

PEACE AND ALL GOOD

- This was the peace greeting of St. Francis.

In all his sermons he began by wishing his hearers peace, saying to them, "God give you peace." The true Lourdesian must be a person of peace; one whose desire is the good and peace of others.

The Cross and the Bethlehem star speak only of one Man, Jesus. His mission on earth was Peace and all Good. From the cradle to the grave, from Bethlehem to Calvary, His life was a sermon of Peace and Love. When he was born, angels sang "Peace on earth and goodwill to men." Before He died on the cross, His last words brought the message of forgiveness and love.

The true Lourdesian must be marked with the star of Bethlehem and the Cross of Calvary. He must be a person whose whole life is permeated with peace and love of Christ. The true Lourdesian is a child of Mary. His life must be characterized by the Marian virtues.

The two arms crossing each other are those of Christ and St. Francis of Assisi. The life of St. Francis after his conversion was nailed to the cross of Christ. With the five wounds imprinted on his hands, feet and side, Francis was a living witness of the Suffering Servant of Yahweh. The true Lourdesian, imbued with Franciscan spirituality must be ready to suffer with and for Christ, believing that no one is really Christian without lovingly embracing his daily cross. The clay pot takes the place of the usual torch. Traditionally, the pot is where we cook our staple food.

The true Lourdesian must always be aware of his Filipino identity, ready to give and serve. The clay pot is earthen, shaped by a potter the way He wants it. Being earthen, it can be easily broken.

The true Lourdesian must always bear in mindthat like this earthen vessel, life is shaped by the Eternal Potter and being earthen, his life is temporary, a preparation for the life with the creator.

LSM values continuous connection with its esteemed graduates for the betterment of programs and services. This form will not only track the whereabouts of the alumni but also provide valuable data that can be utilized for future ventures, events, and collaborations. This will ensure that your beloved alma mater remains abreast with its sons while continuously nourishing future generations of Lourdesian gentlemen through quality Catholic education and formation.

All information and data that will be supplied in this form will only be viewable to authorized LSM personnel and will only be utilized for research and profiling purposes.

We thank you in advance for your cooperation and participation in this endeavor. 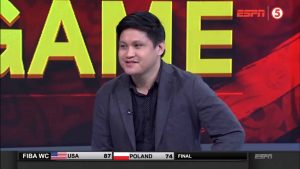 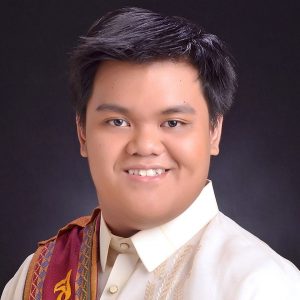 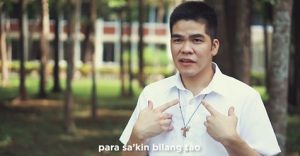 Son of Lourdes Pipo Casimiro testifies to the power of grace and the relevance of chastity in this Live Pure ...
Read More
October 21, 2019 / Alumni News

SOL Catch Us Up