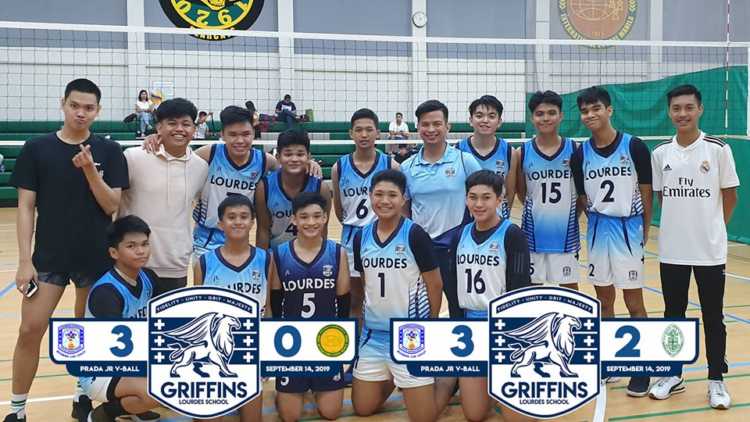 Congratulations to our Lourdes Griffin spikers for capturing a brilliant double win today against International School Manila Bearcats and LSGH Greenies. The Griffins manifested grit and resilience in back-to-back games, soaring above the Bearcats 3-0 and then shaking off the Greenies 3-2. The Greenies put up a tough fight, taking Sets 2 and 3 after the Griffins took hold of Set 1. But the Griffins resolutely rose to the challenge as they held Set 5 firmly under their paws. This majestic win comes despite the Griffin team missing two key players, Masters Graganza and Asuncion, who were away in a spiritual retreat. However, Masters Erwin de Jesus and Jared Trinidad valiantly stepped up their game, firing up the Griffins with a dominant offense. Master Andrei Lomo performed his best serving as setter and playmaker for the first time in the absence of the senior setter. This is an exciting achievement for the Griffin spikers who are now keeping a keener eye on the semifinals, spurred on by SoL Coach Mike Pammit. We salute them and cheer them on with fraternal love and prayers!
#GriffinsForTheWin #RoarAndSoar #LourdesianExcellenceAndCharacter